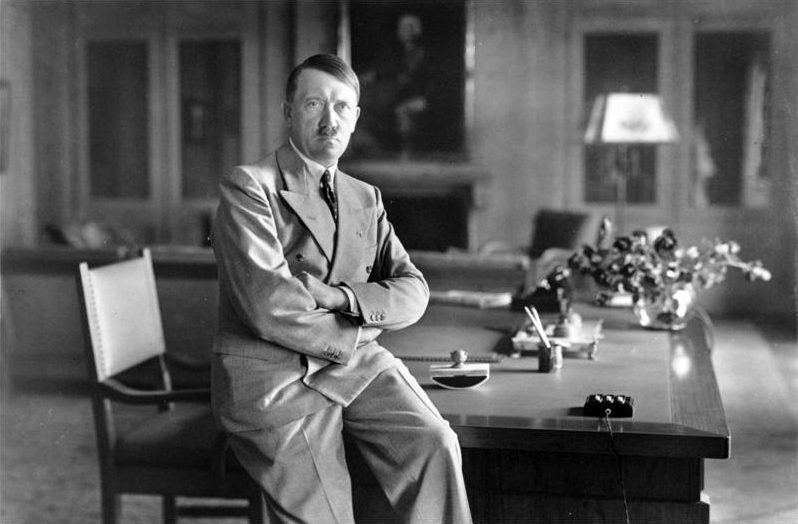 It is very common when evaluating Hitler’s rise to power to view it from today’s perspective, knowing that his actions led to genocide. Because of our current knowledge, one popular question is, “How could anyone follow such a leader?” Germany had suffered a political and economic downfall as a result of signing of the Treaty of Versailles after World War I and many Germans felt humiliated. They wanted to return to their former greatness as a nation and believed they did not deserve the whole blame for the war. Here comes a younger man who spoke passionately of returning Germany to its former glory and greater than it was before. He belonged to a new political party at the time, but people regarded it as a group of radicals. In order for Hitler to win power, he had to appeal to his audience (the German people) to appear trustworthy yet powerful. Hitler carefully cultivated a public image in which he showed himself to be a charismatic, omnipresent, trustworthy leader. He used this public persona to gain power and appear to be a good, competent, strong leader.

Hitler presented himself as charismatic to the peoples through speech and images. His speeches had the ability to get the crowds enthusiastic about national pride through fear and anger. His reference to the Almighty removing His hand from Germany in his first speech on the radio installed anxiety to the German people. It states that the Almighty is disappointed in them for surrendering their national greatness for the sake of peace. It made them reminiscent and nostalgic for a time when Germany had a powerful monarchy like system (Kershaw, 15). Furthermore, by adding the Almighty in his announcement, it invoked fear that Germany would never be glorious again because God was angry with them. At this time, it experienced embarrassment as they had to pay a debt to fellow European countries and lost their territories. This use of language makes the people desperate to return Germany to its greatness.

Another way he appeared charismatic publicly was he practiced theatrics to appear powerful. In the words of Claudia Koonz, “Hitler’s statue-like poses convey the traits attached to his Führer myth: piety, devotion, and steadfastness” (Koonz, 22). He needed to portray himself as fierce and ready to lead the country. By mimicking popular culture of the 1930s and 1940s, he relates to his audience, especially the youth. It made him appear trendy for that time period. Finally, his use of imagery exemplified his goal to appear trustworthy. Nazi Propaganda’s Calvin College source displayed that Hitler’s appearance of grandeur had fans gravitate towards him. Also, Joseph Goebbels’s dedication to Hitler represents how Hitler was able to inspire Germans to pledge loyalty to Germany. By hosting multiple rallies, he was able to keep people in a constant state of passion. By getting Germans to feel that they are a part of something bigger than themselves brings them to pledge allegiance to Germany willingly.

In 1933 media, the focus was to make Hitler appear to be both powerful and relatable. Goebbels was strategic with how to present Hitler as both a Savior and an everyday man. He even intentionally compared Hitler to Jesus: a God-sent man with the aspiration of saving Germany from its turmoil. This parallel in photos and in language is to make it appear as a divine intervention that Hitler was predestined to reign over Germany.

Hitler’s key strategy in his rise to power was the capability to earn people’s sympathy. His reputation transformed from crazed buffoon to passionate leader for Germany’s good. The Beer Hall Putsch started it all. On the night of November 8-9 1923, Hitler, his accomplices Gustav von Kahr, the dictator of the Bavarian state and Ludendorff, and the rest of the Nazi Party plotted an attempted coup against the government at Bürgerbräukeller (Fritzche 58). Although right-leaning and opposing the Weimar, Kahr ultimately could not and did not support Hitler’s plan because it was illegal (Stackelberg & Winkle, 2.13). Hitler’s purpose was to replace the Weimar Republic with an authoritarian regime (Stackelberg & Winkle ,2.13). Nonetheless, the putsch failed: the police and the Reichswehr did not participate in the putsch. It led to a shoot-out between police and Nazis with sixteen Nazis and three police officers dead. Hitler was arrested (Fritzche 58 and Stackelberg & Winkle, 2.13). Hitler’s speech turned him into crazed buffoon to passionate leader (Stackelberg & Winkle, 2.13). He defended himself in court by calling himself a German who wanted the best for his people. He lied in court about protecting Germany from Marxism to make himself appear sacrificial before the judge. Although he was not yet famous, people began to know his name. The public’s opinion continued to view him as crazed. However, they argued that he was zealous for his country. In Hitler’s autobiography Mein Kampf, Koonz stated Hitler transformed his failures into a myth of humble origins, terrible obstacles, and iron will (Koonz, 29). Historian Claudia Koonz said, “With passion verging on hysteria, Hitler accepted his responsibility for violating a constitution he despised” (Koonz, 23). When he became Führer, he took on the humble approach. He portrayed himself as someone making a self-sacrifice of becoming leader (Koonz, 33). Germany went through a political panic and Hitler was appointed Chancellor on the basis of a national emergency. Article 48 in the Weimar Republic stated that in the state of national emergency, Germany no longer responded as a republic and people’s rights disappear (Stackelberg & Winkle, 2.5). When he portrayed a humble approach to becoming Chancellor, the Germans’ could accept in his persona that he was a servant who would comfort and protect Germany.

Hitler’s use of political manipulation converted members who would objectively resist Hitler to join the Nazi Party. He was also able to convert neutral people to his Nazi Party ideology. When he wanted to make himself and the Nazi Party more popular to the public, he targeted an ordinary small town in Germany named Northeim. The population consisted of mostly of Lutherans with a middle class standing. It was less industrial than most German towns. Hitler gained recognition in Northeim during the Great Depression. As millions were losing their jobs, Hitler warned the financially-stable middle class that they could be the next to lose their jobs if they did not join the Nazi Party which offered promises to get Germany out of the Depression (Allen, 24; 274). The fear tactic added with expressive promises caused middle-class members to join the Nazi Party. When he enacted the Enabling Act of 24 March 1933, the purpose was to transfer the legal system of the Weimar to the Reich. It allowed for him to win favor with the Center Party. The Socialists and Communists were arrested, the Nationalists already liked the Nazi Party, and Hitler did not have to meet with the President and Reichstag to consent his decisions. He was seen as untouchable. A key endorsement is Hitler’s ability to win over the Center Party. His promise to protect the Party signified to them that he was trustworthy.

Hitler had an unorthodox approach to politics and economics. Historian Noakes stated, “Hitler’s tendency to create new offices and agencies without establishing clear lines of demarcation of responsibility with existing government departments produced a continual struggle for dominance over spheres of responsibility” (Noakes, 76). He created his own system without consulting the President. Although Hitler and the Nazi Party had a more political and racial ideology, Hitler also knew how to appeal to the audience by giving economic plans assuring Germans of a stronger Germany and restoring it to its former glory.

Talk of the Volk and German pride

This poster is to remind Germans who the real “enemies” are: the Jews. Nazi Germany propaganda portrayed Jews as people who stole the wealth from Germans, made 7 million Germans poor during the Great Depression, and led the 1918 Revolt that led to Germany’s defeat in World War I. The purpose was in order for Germans to feel unity, there had to be an enemy for them to be against.

Hitler made himself appear that he was acting for the people. Before World War II, he asked the Germans how they had felt about him reassembling their military and reclaiming lost territories when he had already done so. The Germans responded enthusiastically to his deeds. His interactions with the audience made it appear that they had some form of power in Hitler’s decision making when the reality was he had already done those acts. Approaching the people directly was not a common practice. This was a unique way for him to create a façade of trust with the people. Also, it made him appear original and modern compared to past politicians, chancellors, and presidents. Hitler continued with the same approach he did when he ran for office by communicating directly with the people. When he wanted Northeimers to partake in the party, he ultimately shut down the other communities in the town so their only option was Nazi-run clubs (Allen, 205). The purpose of participating in any club is to partake in a community. If there was no other club available, one wanted to still know what his or her neighbors were doing, and their neighbor was in the Nazi-based extracurricular activity, then they joined the Nazi-based activities. Hitler identified how effective community was on a people in order to gain more followers. People would adhere to him if they saw others, especially loved ones, adhere to him as well. Hitler defended the Volk to the extent that he could justify invading other countries. In Hitler’s speech, his reason for justifying his invasion into the Soviet Union is made clear to the public. He invaded to prevent Communism from continuing, preserving the strength of both the nation that was Germany and the ‘Aryan’ race.

Hitler created national pride within the Volk. When an American journalist William L. Shirer visited Germany, he observed Swastika flags hung every way. Most of all, he noticed that people went fanatic when Hitler arrived (Stackelberg & Winkle, 3.24). He noticed that he was seen as an untouchable god. The intention of the Hitler myth was to have him resemble a strong and unstoppable leader. However, he used images of himself with every day people and performing regular tasks to make himself seem relatable with the public, such as reading a newspaper or smiling at a little girl.

How the Hitler persona had himself separated from the SS.

On April 1st, 1933, Stormtroopers protested Jewish-owned businesses (Koonz, 41). The truth was Germans did not like it. They had been shopping at those stores for years and they were not going to be told to go elsewhere. Additionally, Koonz declared that Hitler drafted the boycott, but he did not sign it. As a matter of fact, he left for Berlin on the eve of the boycott (Koonz, 40). The purpose was for Germans to not equate the hate crime with Hitler, but with those who committed the crime. Hitler advised the Stormtroopers later not to repeat this act because of the public’s negative reaction. Hitler ran his regime based on people’s responses to his actions and the party members’ actions. He did not allow any form of controversy to destroy his reputation. In his orations, he rarely spoke of ‘Jewry’ in his rise to power. If he did, he mentioned it lightly. Majority of his speeches focused on anti-Marxism (Koonz, 28). Because of his public persona of being more political focused than race-focused, the Volk believed the acts of antisemitism were associated only with Stormtroopers and the SA. Moderates took his previous speeches of antisemitism to be a phase in his life.

Hitler had the ability to move and persuade the people, he said what they wanted to hear, and connected with them both spiritually and politically. He took advantage of Germany’s economic and political collapse to make himself appear as a godsent hero and continued to promote himself as such through his addresses and symbolism. The Hitler Myth portrayed the Fuhrer as an invulnerable and powerful yet relatable leader.

1 thought on “The Hitler Myth”