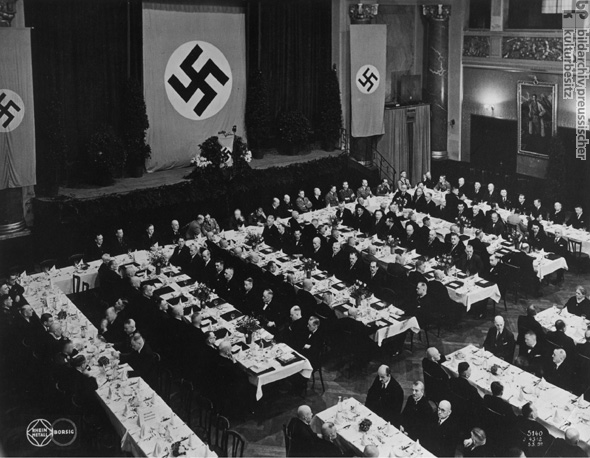 It is a common misinterpretation that German businesses succumbed to the Nazi state with policies forced upon them. However, in many cases, from heavy industry to financial institutes, businesses cooperated in fulfilling the Nazi regime’s wishes. Although German businesses were not directly controlled by the Nazi regime, they willingly collaborated in the government’s goals of rearmament and national recovery, took advantage of a system that allowed for exploitation of slave labor, and despite only a handful of adamant Nazi industrialists, the bulk of them still largely agreed with Nazi economic policy and war intentions.

“It is quite conceivable to turn Germany into a Bolshevist state – it would be a catastrophe… it is also conceivable to build up Germany as a national state.” (Stackelberg and Winkle, document 2.19).

Such rhetoric gained industrialist support, as communism and democracy were denounced by national socialists to delineate differences with socialism in a traditional sense (Stackelberg and Winkle, document 3.3). Thus, it turned out that industrialists held largely similar viewpoints to the Nazis, resulting in little conflict between them. Furthermore, national socialism as an ideology did not wish to spark class conflict, but rather aimed to unify Germans instead of a socioeconomic class of people.

The resulting Nazi economy shifted from nationalized business to privatized business with industrialist support, and shared characteristics of capitalism and planned economies (Turner, 70). During the era of the Great Depression in 1932, the German state held majority stakes within conglomerates such as Gelsenkirchener Bergwerks, a mining firm which owned Vereignite Stahlwerke AG (VS), the second largest industrial company in Germany at that point. Additionally, banks such as Danat Bank and Dresdner Bank were merged and nationalized, while Deutsche Bank accepted government funds during the Great Depression (Bel, 36). After the Nazis amassed their control over the German government throughout 1933, public shares in these companies subsequently fell under control of the Nazis. With a legacy of temporary ownership under the Nazi government, as well as the decision for the shipping, railway, steel and mining, and banking sectors of industry to be privatized in 1937 caused an accumulation of further industrialist support for the Nazi regime, much needed to fulfill the policy of autarky and war preparation (Bel, 38).

A key tenet of the Nazi economy after 1936 was a policy of autarky, or self-sufficiency, deemed as necessary for a war economy and promoted by Adolf Hitler and Hermann Göring under the Four Year-Plan. Hitler had placed Göring essentially of carrying out the Four Year Plan. Autarky primarily applied to the creation of a war economy through self-reliance on Germany’s natural resources and raw materials, rather than foreign raw materials, although once invasion occurred against nations such as Poland, Czechoslovakia, and the Soviet Union, their raw materials were pillaged and stolen by the invading Germans for use in the war effort. Additionally, before war occurred, Hitler essentially ordered production quotas for iron, fuel, and rubber, as well as an ongoing surplus of these materials plus foodstuffs (Stackelberg and Winkle, document 4.3). An example of “extended autarky” is the targeting of Austria by Hermann Göring, which served as another reason for Anschluss rather than purely racial terms, considering Austria is a nation rich in iron ore deposits. Raw materials needed for war include rubber, iron, and fuel, all of which was requested by the Nazi regime towards industrialists and corporations who obliged, save for Ruhr manufacturers who initially opposed Hermann Göring’s demands due to a lack of economic viability.

It should be noted that despite rearmament being a lucrative avenue resulting from autarky, methods in which the Nazi regime went about implementing self-sufficiency were inefficient and not economically viable. The Reichswerke Hermann Göring for instance was created as a conglomerate to combat Ruhr industrialists’ opposition to the policy, since foreign iron was either cheaper to buy or of higher quality depending on its origins. Yet, Göring still demanded an increase in iron production, “I state as my view that it must be possible to secure from German soil sufficient ores for military requirements… Everything possible must be done by the firms, and the State must step in where the firms are clearly no longer in a position to do so.” These Ruhr industrialists were unable to compete with Reichswerke Hermann Göring and the price drops in domestic iron it had caused, resulting in Ruhr companies absorbed into Göring’s conglomerate. Therefore, businesses which could not fulfill Nazi economic policy were nationalized, while those which could accomplish Nazi objectives willingly collaborated as a return of the favor from re-privatization, as well as lucrative prospects via rearmament.

Ferdinand Porsche was one such industrialist who willingly supported the Nazis in fulfilling their plans and goals. Porsche, a Czech automotive engineer who became a member of the Nazi Party in 1937, was ordered by Hitler to create a “people’s car” (Volkswagen), promoted via the Strength through Joy (KdF) campaign to garner working class support.

Porsche went on to design vehicles for the Nazi war machine and rearmament, designing the Tiger series of tanks, as well as the Kübelwagen and Schwimmwagen which were based on the KdF car. Ultimately, this highlights the cooperation of prominent industrialists to create products and desired outcomes of the Nazi state. It should be said that although the KdF car was highly anticipated by the German working class, practically none of the 150,000 people who ordered one received it due to World War II breaking out, as the factory that produced the KdF car shifted to manufacturing the Kübelwagen and Schwimmwagen. Another willing collaborationist industry was the conglomerate I.G. Farben, the largest company in Europe during the 1930s, which manufactured the poison gas Zyklon B, synthetic rubber, and synthetic fuel.

So far, this has been a discussion on German businesses collaborating and cooperating with the Nazi regime, yet some corporations from the United States still operated in Germany, even throughout the war. Notable examples include Standard Oil, Ford, General Motors, Chase Manhattan Bank, Coca-Cola, and IBM to name a few. Some of these companies utilized slave labor such as the Ford plant in Cologne. Other companies were explicitly anti-Semitic in their actions, with General Motors’ Opel division and the Associated Press firing all Jewish employees to continue their business within Nazi Germany while IBM created the framework for the Final Solution through punch cards used to track Jews and other undesirables (Berghahn, 260-74). The primary reason these American companies continued business within Germany however, was the appeal of high profit margins. To these companies, and to many German companies, profit eclipsed defending Jews, with increased profits being the primary reason for corporations willingly collaborating with the Nazi state.

Considering that the Nazi economy was primarily devoted to war and rearmament, Nazi control over corporations loosened, but corporations and conglomerates still did the bidding of the state. By the time war broke out, Hitler and Göring had began to focus more on the war effort rather than the economy, which was problematic considering Göring’s dual authority over the Four-Year Plan as well as the Luftwaffe and eventually as Reichsmarschall over all armed forces by 1940. Consequently, a retrospective account from Hans Kehrl describes this inefficiency:

“All [of Göring’s] energy and thoughts were focused on military events [in Poland, Norway, and the western campaign]. As a result, the Four-Year Plan which had been conceived as a control centre for the whole economy was almost completely inactive.” – Hans Kehrl

The German economy would become further entrenched in a war economy, eventually with all economic output dedicated towards the war in 1943 following the German defeat at Stalingrad and subsequent defense on the Eastern Front.

Aforementioned anti-Semitism within the industrialist class was not purely present in overall industrialist support of the Nazi platform, but also in willing exploitation of slave labor within factories and in ousting and discrimination of Jews in the workplace. The racial hierarchy imposed by the Nazi state with the Nuremberg Laws in 1935 were not challenged by factory owners, who employed foreign workers (Ostarbeiter) and slave laborers in factories attached to concentration camps or who were forcefully migrated to replace the prior labor force now at the front lines. The previously mentioned ousting of Jews in the workplace took place on November 12, 1938, with Jewish-owned and operated businesses liquidated and nationalized while Jewish managers were fired (Stackelberg and Winkle, document 4.13d). Companies willingly complied with either the use of slave labor or the firing of Jewish employees, chiefly because of high profits by doing so.

However, by the end of World War II, the fate of German companies that willingly fulfilled the desires of the Nazi state was in question, that is whether the responsible companies were to be liquidated by the Allied Powers (Schweitzer, 1). After the legacy of collaborating with Nazis, it was difficult for industrialists to confront responsibility for crimes, yet industrialists were trusted to also rebuild West Germany as a liberal democracy, a stark shift away from Nazism that had once been so advantageous to big business (Wiesen, 226). Memory of Nazi crimes associated with big business and industrialists was thus relatively short lived within postwar Germany, with many corporations only apologizing to or repatriating Jewish victims years or decades after the atrocities of the Holocaust.

In conclusion, National Socialism would not have been as possible without the complicity, forced or otherwise, of industry and big business. The reality is that many German and international corporations fulfilled Nazi wishes, including persecution, exploitation, and genocide of the Jews and other “racially undesirable” peoples. Many of the victims of the Holocaust were slave laborers to these corporations. As a result, profit was sought by companies who shared the same viewpoints as the Nazis who wanted rearmament, defense spending, and any other Nazi intentions, thus leading to corporate collaboration with the state.