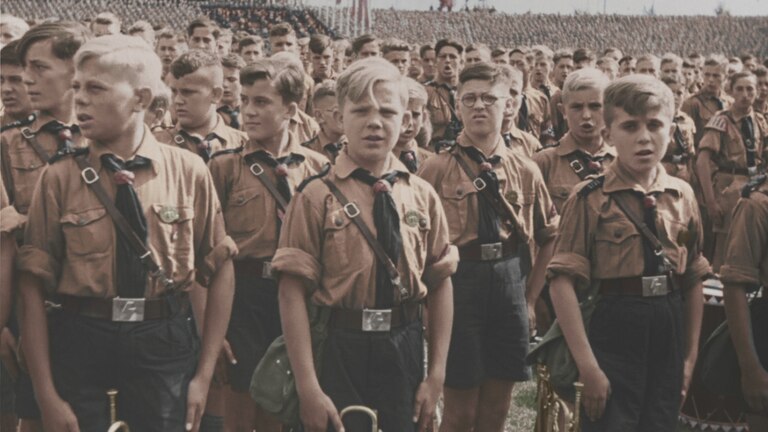 The Nazi regime believed that the future of the Nazi state rested in the hands of the youth. A sense of community was incredibly important to the stability of the regime and there was a special effort to reach out to young people. The government wanted to control the intellectual, physical, and moral formation of German children. Central to getting the German youth to pay attention to Nazi ideology was emphasizing a “national community” based on ethnic solidarity. The Hitler Youth program began in 1922 as a voluntary organization, eventually becoming mandatory for all children. All other youth groups were exterminated. The Hitler Youth attempted to prepare young boys for war and prepare young women to be mothers of the next generation. It tried to ensure conformity to Nazi ideology and create a guise of a national community forged by Nazism. Because of the intense focus on the youth during the Nazi regime and World War II, the children who grew up during that period are still affected by their experiences today and their family history can be used as a form of public history.

Our Youth shall learn nothing but to think German and to act German…And they shall never be free again for the rest of their lives.

For the National Socialist regime, indoctrinating the youth was a top priority. The future of the Third Reich rested in the next generation’s hands. All other youth organizations were dissolved by 1933 to strengthen a single youth organization: the Hitler Youth. The Law on the Hitler Youth (1936) made Hitler Youth membership mandatory, transforming the party organization into a state organization. Hitler Youth indoctrinated its members with Nazi political-ideology and emphasized physical education, promoting ideals such as strength of will, obedience, and duty. By 1939, eighty-two percent of German youth between ten and eighteen years old were members of the various divisions of the Hitler Youth (Caplan 110). Attraction to these Nazi organizations for the youth stemmed from the excitement over “big show” events, programs, and “games” (Tubach 50). In 1939, a second execution order was issued, making membership to the Hitler Youth mandatory for all Germans between the ages of ten and eighteen. Parents were made responsible for ensuring that their children were registered for membership. Those who did not join faced criminal prosecution. However, membership did not mean activism (Caplan 110). Mandatory indoctrination of German youth caused growing discontentment. Several opposition groups against the Nazi Party formed among German Youth, such as the Swing Youth and Edelweiss Pirates. They rejected the Hitler Youth’s mandatory policy and militaristic drills.

Once you were drawn into the regime, you somehow lost your legitimacy as an individual.

My grandfather’s experiences as a child in wartime and post-war Germany help to explain how Nazism, the war, and the post-war era affected the lives of German citizens through weaving storytelling and historical information. My grandfather, Josef, was born in Mainz, Germany in 1940. His father, Otto, worked for the car factory, Opel, as a “tool designer” before and during the war. His mother, Margaret, worked in a fur coat store before the war. The store was run by a Jewish family, who “disappeared,” and Margaret became a homemaker during the war. My grandfather asked his mother when she was alive what she thought had happened to the family she worked for. She had thought they went on vacation, portraying the innocence and naivety of German citizens during the regime, as well as the ambivalence that many felt towards the unusual circumstances happening pre-war. After the war, Margaret sold insurance because the family needed money after the devastation of the war.

The Nazi regime infiltrated all aspects of German citizens’ lives. Many of my grandfather’s childhood toys featured swastikas and German flag colors. Even before the start of the war, Nazi flags and Nazi propaganda were commonplace. The Nazi flag hung outside my grandfather’s house growing up before and during the war. He lived over a grocery store which was an independent business, meaning the owner had to support the Party despite his hostility towards the war. My great-grandparents owned a tablecloth embroidered with swastikas. The symbols around the border were unknown to my grandfather. Nevertheless, the Nazi regime promoted itself in all aspects of every-day German life.

The regime challenged traditional vehicles of inculcation, such as school, church, and the family in order to remove moral guidance, cultural norms, and moderating influences from German youths’ lives (Tubach 47).During the regime, teachers had their roles recast. Teachers no longer imparted educational knowledge. Rather, their new goal was to form racially conscious National Socialists. Above all, Nazi agenda was meant to indoctrinate German youth in the “Jewish question” (Jarausch 115, 130). Nazis made sure that, regardless of support, all Germans felt their presence.

The pulse of the blood must blend in with the rhythm of the machine.

My great-aunt’s generation, the “war generation,” experienced the most far-reaching and repellent grip of the Nazi regime on German youth. The youth policy this generation experienced, particularly through the Hitler Youth, was aimed at securing loyalty to the regime and willingness to fight in the future war (Peukert 26). My grandfather’s older sister, Irma, was born in 1930. She was a teenager during the war. She recalled seeing the dead bodies of people laid out the streets after bombings. She would go to see who in town had died and then would report back the information to her family. She was a mandatory member of the Hitler Youth in the early 1940s. During the war, the NSV (National Socialist People’s Welfare) evacuated mothers and children from cities into the countryside because of air attacks and bombings. She and other teenagers from Mainz were sent to the countryside during the war by the German government for protection from bombings. Most people stayed with rural hosts and foster families. Irma was sent to the United States when she turned eighteen years old in 1948. My grandfather would follow the same path and come to the U.S. when he turned eighteen years old.

My grandfather, despite being very young, remembers wartime Germany clearly. He recalls the constant sound of airplanes and bombs falling in his town. Towards the end of the war, Mainz had been fully bombed. My grandfather’s eyes would burn as he walked through the neighborhood because of the gas from phosphorus bombs. In 1945, an unexploded bomb fell through the roof of his family’s house into the upstairs bedroom. He and his family would run into their cellar during air raids. He remembers German soldiers marching down the streets to protect the residents and the American convoys moving in after the war. American soldiers, on multiple occasions, searched my grandfather’s home for contraband or German soldiers. My grandfather recalls being nervous that the Americans would take his toys, but they never did.  American presence greatly affected German life. Bars and restaurants in Mainz became “off-limits” to Germans during the 1940s and after the war.

The post-war generations know a great deal about the crimes of National Socialism today, and as a result, many have worked privately to work through family stories as to preclude or understand any parental and grandparental involvement or resistance towards the regime. In her graphic novel, Belonging, Krug integrates text, graphics, and primary sources to pull the audience into the history of Nazi Germany through interweaving her family history and presenting the experiences of second and third generation Germans dealing with inherited trauma and collective guilt (Krug). My grandfather’s generation inherited shared responsibility, despite neither contributing to nor resisting against the Nazi regime. In his generation, very few people desired delving into a past entrenched in guilt and humiliation.

According to my grandfather, nothing about the war or the Nazi party was discussed at school. There was a deep sense of embarrassment for their loss. My grandfather did not learn about the Holocaust, or even the Nazi Party, in school until the late 1950s. When my grandfather was in Germany, he would see films depicting Germans as cruel. This angered him at the time because he did not understand why people viewed Germans that way. It was not until my grandfather started reading about the Nazi period in books at the local library that he learned about that part of Germany’s past and what the Germans had done. His parents and sister would never discuss what happened during those years, and he never asked.

When my grandfather came to America, he never felt ashamed for being German. He took solace in the fact that his family never took part in the war. Rather, my grandfather is proud to be German today, recalling the pre-twentieth century musicians, artists, inventors, and intellectuals from Germany. In the U.S., his sister married a Jewish man who grew up in Poland during the war. The second generation of Germans during the war tried to come to terms with and “atone” for their parents’ sins. Like most topics concerning the aftermath of the Third Reich, whether she married because of true love or love influenced by guilt, my grandfather and I would never ask.